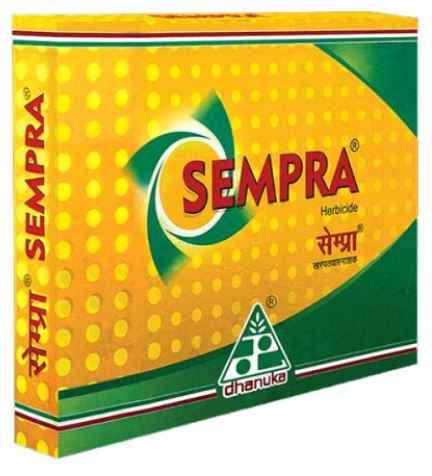 Pay On Delivery or Online Payment

It is a selective, systemic, post-emergence herbicide with WDG formulation for effective control of Cyperus rotundus from nuts in Sugarcane and Maize crop. SEMPRA has strong systemic action i.e. moves in both ways through Xylem & Phloem.

SEMPRA stops the metabolic functions of the Cyperus by stopping the formation of the amino acids (Valin, Isoleucine, Lucine) which is responsible for the protein required for the growth of the Cyperus resulting in the yellowing of its leaves & nuts becoming darker & further destroying it in 14-30 days.

Mode of Action: Taken up through the roots and shoots, upwards via the xylem, and downwards via the phloem. It accumulates in the plant and inhibits the plant enzyme acetolactate synthase (ALS) which is responsible for purchasing essential amino acids. The affected weeds cannot, therefore, maintain proteins for new cells. The whole process is driven by the plant's use of water (transpiration).

SEMPRA, being a sulfonylurea group herbicide, inhibits acetolactate synthase (ALS), which is the first enzyme in the biosynthetic pathway of the essential branched-chain amino acids (Valine, Leucine & isoleucine). Inhibition of ALS leads to the starvation of the plant (Cyperus rotundus) for these amino acids, resulting in the death (killing) of weeds. For crop plants, in the grass family like maize sugarcane, etc. there is no effect of Sempra as these plants have strong MFO (mixed function oxidases which break down the herbicide molecule to acid metabolite forms.

I have used and fully satisfied with the result

Im using it regularly on my paddy crops, once you apply you can see the results in 4~5days.

We spary in Citrus crop